My daughter, Josie (8), spent the first few days of this week forcing her blistered thumb in people’s faces and proclaiming, “Look what I did!”

It was the size of an iPhone app button, if that button was a miniature cellophane balloon filled with whatever the stuff in a blister is. Pus?

This blister was the result of some serious labor.

When we arrived at the fair for her aerial gymnastics performance, we had a little time for rides before the show started. She was determined to spin herself dizzy on the teacups. From the moment she plopped into her teacup until the ride was over (two minutes?), she very aggressively achieved her goal.

But as she walked off the ride, pain spread across her face. She’d rubbed two blisters. One had popped in the process of spinning and now a splash of water, a bandage, and a little fanfare ensued as we treated the little gymnast who’d spun her teacup so hard she’d injured herself.

She made it through her performance—striking poses on a rope ladder with two other girls—and an afternoon at the fair without much more drama (aside from the very awkward moments when supervisors had to be called to convince ride workers that if her head touched the line on the height chart that meant she could ride).

The big blister popped a few days later at school and the healing has begun.

She’s now checking the progress and smiles as she remembers how fast she was able to spin. Maybe she’ll hold back next time. Or maybe she’ll wear gloves.

Her experience and the wound hasn’t slowed her down much. She had a speaking part at church Tuesday and nailed it. Today she has a practice standardized achievement test. And Friday… Spring Break begins.

That’s right. This family, which has been a collection of spinning teacups for the past several weeks as our pre-Covid schedule seems to be returning, is taking an actual break.

We’re headed to the Keys and I’m determined to let my mind heal itself.

I’m getting off my personal spinning teacup (which, boy do I love making go round and round faster and faster) and I’m going to intentionally relax, reflect, and envision our future.

As a newsletter creator, it’s important, I think, to carve out a moment to distance yourself from the process you’ve created and return fresh with ideas.

I’ve invited Sarah Colley, a talented freelance writer I’ve been engaging with on LinkedIn, to be your guest curator for Opt In Weekly next week.

You’ll notice a few references to her below in the Screen Share and Marketing sections. Please give her a warm welcome and enjoy her take on content and newsletters. I’m excited to see what she does.

Note: Nominations created on all building/sending platforms are welcome.

Now, let’s spin along into this week’s roundup of newsletter advice. 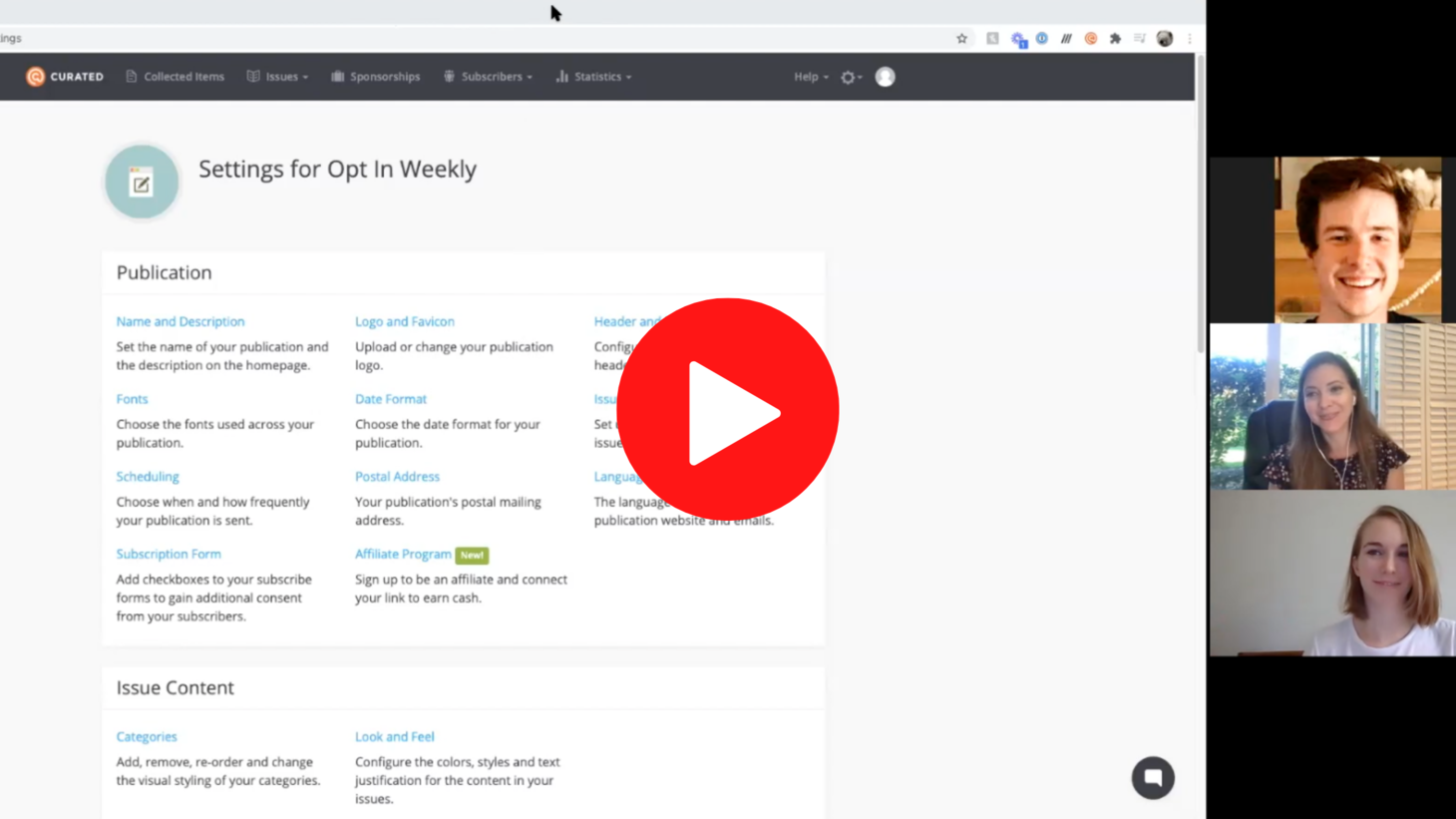 Meet Sarah Colley And See How We Set Up Guest Curators

In this recording, we show Sarah Colley what goes into creating an issue of Opt In Weekly and get her all set up for success.

You might find it helpful if 1) you’re curious about how you’d bring on a guest curator/writer yourself, 2) you love behind-the-scenes stuff and want to learn my process, 3) you’re super excited about what she’s going to deliver next week and want to learn what she’ll be doing (because you kind of want to do this yourself one day).

To learn more about Sarah, check out her out her website.

In this article, she lists 7 reasons you might be losing them and what to do about it.

The number one reason?

“You’re sending too many emails”

“There are two ways to fix this problem. The first option is to switch to a less frequent email marketing schedule. For example, if you’re currently publishing five days a week, you might switch to three or even one day a week.

The second option is to let subscribers choose how often they hear from you. You can build weekly and monthly newsletter options, then allow subscribers to choose these during signup. You can also send users who have stopped opening your emails a message asking if they want to switch to a list or segment with fewer emails.”

The other six reasons are also worth considering.

In this article, Alexandria Symonds explains how The New York Times tests headlines that run first on their site and then in the print edition.

“The Times also makes a practice of running what are called A/B tests on the digital headlines that appear on its homepage: Half of readers will see one headline, and the other half will see an alternative headline, for about half an hour. At the end of the test, The Times will use the headline that attracted more readers.”

If you’re struggling with subject lines, adding in an A/B test can help you stop guessing which will perform better and just test it. If your ESP doesn’t offer this, create a group of contacts who you trust to be judicious and send them the 2 options you’re considering.

Can You Measure The ROI Of Blogging? Sarah Colley Reports: Yes. But It’s Complicated

You know you should be publishing blog articles, but how do you prove the investment is worth the reward? Next week’s guest curator Sarah Colley recently published this article to dive into what can be measured and why.

Hint: Content marketers have to be willing to live with some intangibles, but there are some metrics that can be tracked to prove the effort pays off, and setting up Google Analytics properly (she offers instructions) can help your case.

A Growth Marketer Is A Marketing Manager, Kind Of

Camille Trent at MarketerHire gets real about what the title Growth Marketer actually means, which titles are used with it interchangeably, and what nuances should factor in.

“Growth marketers put stock in the validity of your product or service, and find the best way to reach your desired audience — using data-backed insights, iterative testing, and statistical modeling.”

She also provides some things to consider if you’re considering hiring one.

Speaking of growth marketing, it seems everyone has a new growth strategy they’re pushing these days. In the past week, each of these articles found my inbox and caught my interest, so I thought I’d share them with you.

1) Hal Koss explains Community-Led Growth. The premise is that companies are prioritizing building a community as a core action instead of simply adding on community as an afterthought.

Is Your Writing Vivid? Ann Handley Can Help

Want to paint pictures with words? Include interesting details.

Ann Handley lists five things you can add to upgrade your copy from abstract to focused in THE P.A.N.D.A. 🐼 GUIDE TO VIVID WRITING.

After you read it, go paint a panda-driven newsletter. (Am I the only one laughing at this bad joke? See Marketing.)

Why Choose Between Ads And Subscriptions?

Financial Times chief executive John Ridding has said news publishers “can have your cake and eat it” but only if they have a “robust reader revenue foundation.”

Enter To Win A Free Year Of Curated

We’re launching a contest to give away free Curated accounts.

The 3 entries with the most votes will win 12 months of Curated. The 3 runner-ups will win 30% off a year of Curated. See the Official Rules for more details. This contest ends April 15 at 11:59 p.m. EST.

This Newsletter Fest Panel Has Me Giddy

I’m pretty jazzed to announce the discussion that will be taking place on the final day of Newsletter Fest (Friday, April 16):

Blurred Lines: What Marketers and Journalists can Learn from Each Other When it Comes to Serving Readers and Growing Loyal Audiences

This panel will be hosted by Mary Ellen Slayter of Rep Cap Media and Managing Editor Magazine. Participants include Trello's newsletter team, Jenny Rothenberg of BACH (former Director of Growth at Morning Brew), Ryan Heafy (Co-Founder + COO at 6AM City) and others (they'll be added as commitments are finalized).

The discussion will be focused on the tactics marketing teams and editorial teams can “borrow” from each other and why.

Register for this session here and check out who else is joining us for this FREE ONLINE EVENT.

There will be workshops all week (April 12th through 16th). Be sure to subscribe to the Newsletter Fest Newsletter to receive updates as this event draws near.

Psst! We’d be extra thankful if you’d share this event on social media for us. Here’s a link to some promo videos you can use.

Josh Spector of For the Interested just published a 5-day plan to help newsletter creators grow their newsletters.

Your Opt In Challenge this week is to commit to following his instructions. You’ll be improving some critical things and learn a ton along the way, like why you can’t just drop a link to a recent issue on social media and expect to see subscriptions soar. Learn what you should do instead.