“Eudora darling,” the letters would begin.

The paper yellowed, but the handwritten script very much still alive.

Katherine Anne Porter’s very intimate words intended for her friend and mentee, Eudora Welty, somehow in my gloved hands to be archived after the renowned Mississsippi author died.

During college I’d managed to land myself in a class whose primary project was to spend time IN EUDORA WELTY’S HOUSE READING HER LETTERS FROM FELLOW AUTHORS.

It was… literally quite literary.

And… almost voyeuristic, reading Porter’s words to Welty and escaping into their reality.

The latest news from Yaddo (the artist community in upstate New York where Porter lived) was mailed to Welty’s home in the Belhaven area of Jackson, where she’d returned to care for family after a stint in New York.

I became a bit addicted to the epistolary exchange, feeling as some fiction writers and film creators can make us feel: a bit too close to the story.

The way you’d feel if you’d found a box of your grandmother’s letters in the attic.

I’m reflecting on this at this very moment, fellow newsletterers, because I’ve begun to notice a lovely exchange that occurs after sending an issue of Opt In Weekly: a handful of repeat responders who send me their thoughts, to which I always reply.

What began as “Subscribe to my newsletter” has grown into real relationships.

And the exchange has inspired an idea I don’t quite know how to pursue: what if there were a newsletter that made you feel as if you were witness to the back-and-forth email discussion between 2 people?

“But have you considered this?”

“Oh, that’s even better. Here’s my attempt at trying that…”

The way Porter mentored Welty, yet was her friend, too.

While I ponder that, here’s something for you to consider:

Make your reader feel as if you are writing to them alone. Newsletters as a genre allow senders to create that sense of intimacy. Immerse in it.

Congratulations to Opt In Weekly curator and commentary writer Samantha, who had a baby earlier this week. We’re so excited for you!

Thank you to Seth for helping with commentary this week. We did it!

Opt In Weekly is taking a spring break vacation next week while I enjoy some family time. See you in 2 weeks.

What You Can Learn From Wartime Storytelling

In his recent issue of The Storytelling Edge, Joe Lazer (Lazauskas), former CMO at Contently and current Head of Content A.Team, focuses on the power of storytelling in the Russia / Ukraine conflict.

“Ukraine President Volodymr Zelensky was doing the impossible in the Facebook era: He was making the truth more compelling than disinformation.”

It feels almost insensitive to include this as a newsletter tip, but the reason I’ve included it is because as creators we should always aim to tell the truth in compelling ways. I feel like Joe hits on that in his newsletter and hope it can inspire your content in some way.

CJ Chilvers, author of this newsletter captured 35 lessons learned from 35 years of newslettering. They're deliciously succinct and powerful. Here are 4 that resonated with me:

“There is no competition for your personal voice.”

“Curation matters. There’s way too many creators and not enough editors. This scarcity creates value.”

“Meet your subscribers. When you meet readers in person, you get a better understanding of how what you do fits in their world. It shapes the way you publish, as well as what you publish.”

“Monetization is a byproduct. If you build an audience to serve that audience, monetization will present itself. You don’t need to chase it. You don’t even need to accept it if you don’t want the added responsibility...”

I encourage you read (and save!) the entire list for future reference.

A Local Newsletter Company Made This Fast Company List

If you think newsletter fatigue is imminent, reconsider it.

Fast Company's The 10 most innovative media companies of 2022 includes 6AM City, a hyper-local newsletter publisher that’s quickly grown to 24 cities.

“Over the past year, 6AM’s revenue has doubled to $5.2 million, and its subscriber base has grown to 800,000 subscribers. It has more than 450 active advertisers with over 95% advertiser retention.”

Which of these campaigns performed better?

Sam Kuehnle of Refine Labs posted about how he analyzes and interprets this sort of ad data differently now than he did in the past over on LinkedIn. Click through to see if you agree.

This Digiday article by Kimeko McCoy explains why one size does not fit all.

Jonathan Crossfield reminds us that the writing process rarely produces great results if we rush it in this piece for CMI.

The Future Of Global And Local Publishing

This week's publishing insights take a look at global and local publications' success and how they're preparing for the future of the industry. 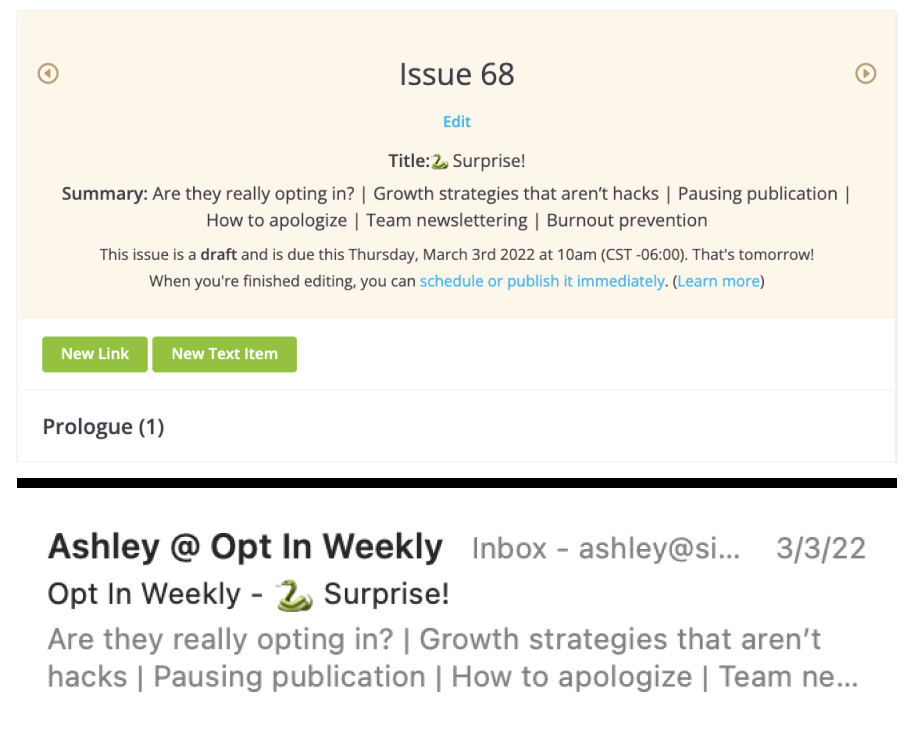 You can use the subject line to catch the attention of your readers (we like to copy/paste emojis from Emojipedia) and hint at the content of each issue. The preview text can then be used to further tease what’s inside.

The Issue Summary has an additional function: acting as the title of an issue on your publication’s Archives page (example).

Some email builders just pull preview text from the first words of your email, which may be things like “View in browser” or ”Hey, [NAME]” or “Image title.”

As usual, the first 30 minutes include a tutorial on getting started with Curated followed by a Q&A session that begins at 4:30.

This is built to be a come-and-go Zoom call, so feel free to hop in whenever you can and leave when you have to.

If you have any questions about Curated or newsletters, we created a Google Form where you can submit them.

Seth will answer them live at Curated Crash Course during the Q&A segment of the session, but if you can't make it, he’ll send you a recording so you can see your questions answered.

New to Curated? Make a copy of this Getting Started with Curated Checklist to help launch your newsletter (public, private, or paid).

Your Opt In Challenge this week is to follow this strategy from Amanda Natividad:

Deleting subscribers who aren't interested in your content will do wonders for your engagement metrics and help you understand who you're audience really is.