For 4 mornings in a row, my family has been uncomfortably anxious.

The school bus tracker app, which shows us exactly where the elementary school bus that picks up our youngest daughter, HAS NOT BEEN WORKING.

It’s glitched every once in a while throughout the year, but never for 4 consecutive, frustrating days.

“Can’t you just take her to the bus stop a little before the time when it should arrive?”

And this feels logical.

But 6:37 is rarely when it actually makes the stop.

Some days it’s 15 minutes ahead.

And, I don’t know about you, but making educated guesses at the crack of dawn (sunrise was 6:41 a.m. this morning) isn’t my strongest skill set.

I err on the side of DO NOT RISK MISSING THE BUS.

Because missing it means an hour of your life shot sitting in bumper-to-bumper traffic on 2-lane roads that weren’t planned to accommodate thousands of frustrated parents and little ones.

So, for the past 4 mornings, we’ve been checking the app (which, for some reason, works like magic in the afternoons and gives us false hope for the next morning), complaining that it’s not working again, and feeling absolutely blind without its guidance.

“So, how does this help me make my newsletter better?” you ask (clearly the repetitive rough start to the day has me hearing voices).

If you stopped sending (just as the tracker has stopped working reliably), would your subscribers feel anxiety or frustration?

Or would they not really notice?

Aim to be critical, or at least semi-critical.

Enough so that they’d notice your absence.

I’m not saying go wreck their mornings with a no-show every so often.

But, it’s actually healthy if your readers depend on you for a specific reason.

It strengthens your relationship with subscribers when you send what you say you’ll send.

When you… actually deliver, right?

Your newsletter should provide a value they’d rather not live without.

Be the reason they don’t miss the bus.

In her recent Valentine’s issue of Total Annarchy, Ann Handley shared some excellent advice for newsletter creators, including an analysis of nominees for the “best” of her newsletters in categories including:

Plus, she asks, “What lessons can we learn from these?” and shares some findings:

What can you learn from your “best” newsletter issues?

P.S. I personally contributed to her OWBR on this issue and let her know how much I loved it... to which she responded, “I literally thought of you with the rhyme ‘newsletter’ & ‘knew better.’” ...so I’m feeling incredibly special this week.

How Readable Is Your Newsletter?

Just ask Phil Adams, who wrote this article about getting started for Mailjet. It’s fairly candid about how much effort it takes to build a successful newsletter. Plus, he provides some lists (towards the end) of content ideas for different types of newsletters.

My only qualm is his advice that you or your team likely has plenty of content worth sharing just sitting around.

“So, when it comes to brainstorming your next newsletter, the email content should be there, ready to go. Leaving you more time to focus on creating eye-catching subject lines and sculpting beautiful newsletter designs.”

Hmmm.... not really. Unless the newsletter audience you hope to attract is crazy interested in what’s going on at your company. I’d adjust this bit to encourage newsletter creators to seek out topics their audience actually cares about and to strategize content they can’t find elsewhere. This could easily be confused for “Just share what’s important to you and people will read it.” And we all know that’s not always true.

This Also Applies To Unsubscribes

How do you feel about unfollows? Maybe this viral tweet from Tobe Nwigwe will help to give some perspective.

3 Experts Weigh In On Marketing Operations

Robert Rose is challenging the idea that producing more content assets is the best way to scale your content strategy in this CMI article.

Instead, he offers this:

“The only way to truly scale is to shape, guide, and, yes, direct everyone in the business to do their part in telling the brand’s stories in one voice.”

Related: Visuals are a powerful way to convey your content strategy. Nadya Khoja shares how to do it right here.

Is SEO Worth It?

Tom Critchlow breaks down the cost and return of SEO in this issue of the SEO MBA.

Improve Your Curation With Data

How much do your metrics affect your curation? Iskra Evtimova shares what role data should play as well as other best curation practices here.

Curating is easier with the right tools in your toolbelt. Lejla Hadzimahovic shares 6 tools that might just help here.

Just how knowledgeable are you as a publisher? This week’s insights help to shed some light on everything from online subscriptions and subscription marketing to morality and URLs.

Are You Advertising In Other Newsletters?

The 1440 Daily Digest newsletter has been advertising in other newsletters and has seen 15,000+ new subscribers using Swapstack. Anangsha Alammyan has the full story here. 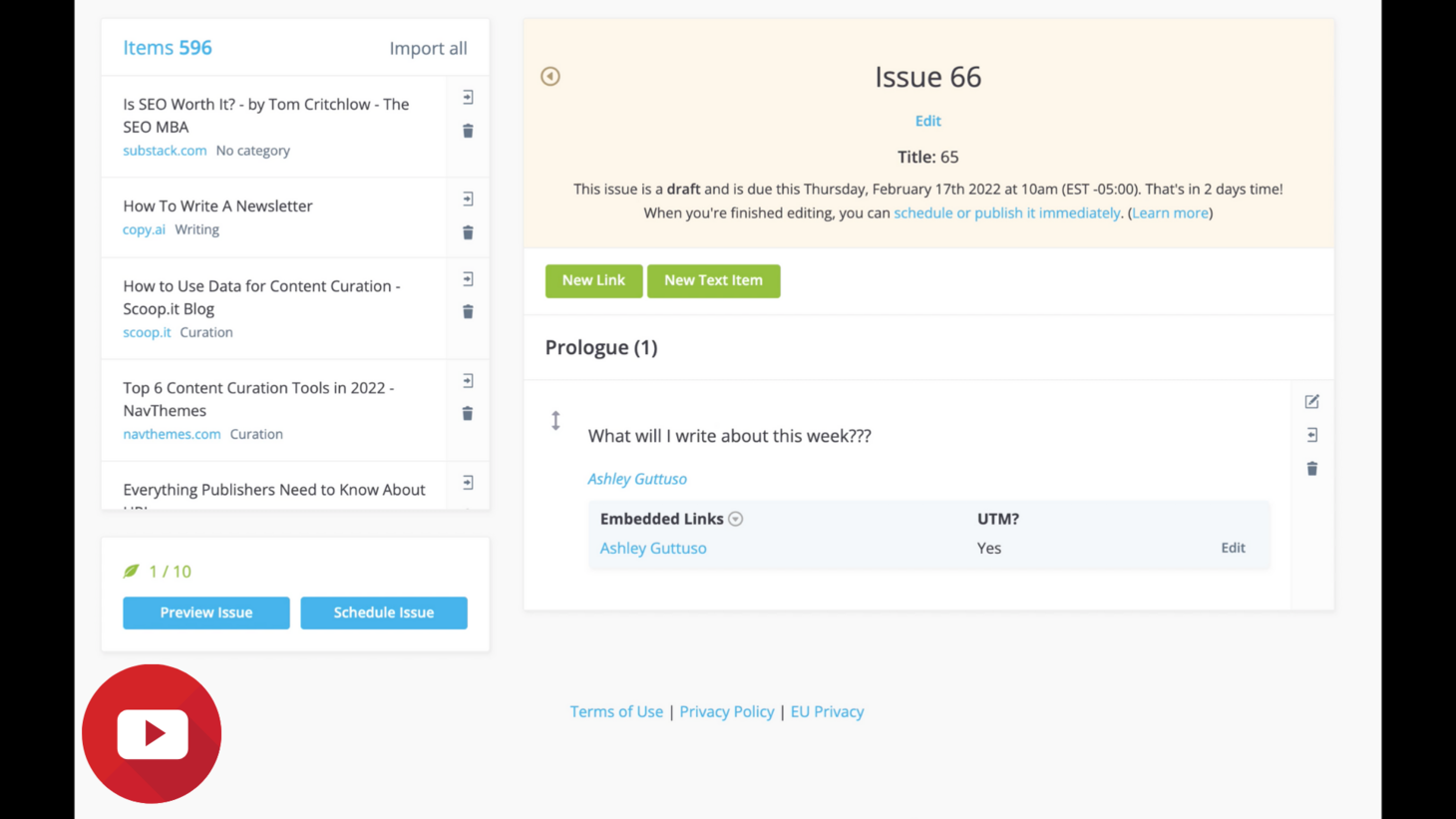 In The Quest To Show, Not Tell

I often get questions about my newsletter-building process.

So, this week, I took some time to screen record a part of it. Then I realized watching it would make me yawn, so I asked Seth to speed it up, kind of like a time-elapsed sunset.

While this video isn’t as beautiful as watching nature do its thing, it does show a few of the steps that go into creating Opt In Weekly each week.

Here, I'll outline our weekly routine (the steps in bold are the ones captured in this 6-minute video).

Let me know what you think.

As usual, the first 30 minutes include a tutorial on getting started with Curated followed by a Q&A session that begins at 4:30.

This is built to be a come-and-go Zoom call, so feel free to hop in whenever you can and leave when you have to.

If you have any questions about Curated or newsletters, we created a Google Form where you can submit them.

Seth will answer them live at Curated Crash Course during the Q&A segment of the session, but if you can't make it, he’ll send you a recording so you can see your questions answered.

New to Curated? Make a copy of this Getting Started with Curated Checklist to help launch your newsletter (public, private, or paid).

Ask Yourself These 12 Questions

Why do you want to be a creator? Josh Spector encourages creators to not only ask themselves this question, but to ask 11 others as well. This week’s Opt In Challenge is to take some time to read through the 12 questions and answer as honestly as possible.